​Margaret has performed with the Vancouver Symphony, Kitchener-Waterloo Symphony, Windsor Symphony Orchestra, London Symphonia, Niagara Symphony Orchestra, and Opera Ontario. She was a member of the National Academy Orchestra of Canada for two seasons her reed trio Trio Pistachio was one of a select number of chamber groups invited to perform in the live round of the 2011 Fischoff National Chamber Music Competition. She has presented at conferences of the International Double Reed Society (2012, 2022), the Texas Music Educators Association (2022), and the National Association of Wind and Percussion Instructors (2021).

Margaret has conducted guest master classes at Western University, the University of Victoria, and Kenyon College. In the summer, she teaches bassoon at the Bobcaygeon Music Camp in Ontario and the Honors Music Institute at Penn State. She has also taught at the Bocal Majority Double Reed Camp in Houston, Texas. 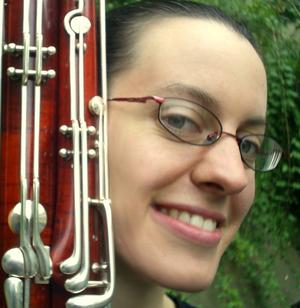 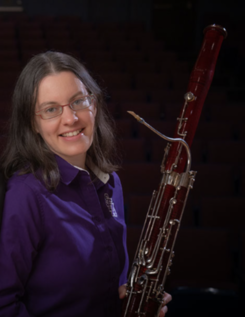 A native of Halifax, Nova Scotia, Dr. Margaret P. Fay joined the faculty at Penn State University in fall 2022 as Assistant Teaching Professor of Bassoon. In her role at Penn State, she teaches bassoon lessons to music majors and minors, orchestral literature, and bassoon methods, and plays in the Pennsylvania Quintet. Before joining the faculty at Penn State, Dr. Fay taught at Stephen F. Austin State University, Western University in London, Ontario, and the University of Guelph. She and her oboe-playing husband form the Reed Minders Duo, which has performed across Canada and the United States.

Margaret holds a Doctor Music in Bassoon Performance from Indiana University. She has also completed a Master of Arts in Music Theory from the University of British Columbia, a Master of Music in Bassoon Performance from Ithaca College, a Diploma in Chamber Music from Wilfrid Laurier University, and a Bachelor of Music from the University of Toronto. Her most influential teachers include William Ludwig, Kathleen McLean, Lee Goodhew, Nadina Mackie Jackson, and Chris Palmer. During her three years of doctoral course work at Indiana University, she taught six undergraduate courses as an Associate Instructor of Music Theory. ​

As a composer, Margaret especially enjoys writing works that include at least one bassoon. Two of her works, Canine Miniatures (2006) for oboe and bassoon and Blightsworth's School for Gifted Waterfowl (2015) for reed trio, have been performed at conferences of the International Double Reed Society. Blightsworth's School for Gifted Waterfowl is available for purchase from Trevco Music. Alongside her bassoon and music theory studies, she took composition lessons with Dr. Sally Lamb McCune at Ithaca College, Dr. Stephen Chatman at the University of British Columbia, and Linda Catlin Smith at Wilfrid Laurier University.

In her spare time, Dr. Fay enjoys running, board games, playing with her son Jasper, and working on her no longer top-secret project: tap dancing while playing the bassoon. She was thrilled to have been selected to appear on Season 2 of Canada's Smartest Person in Fall 2015. You can watch her go head-to-head with a surgeon, an engineer, and a football player through the CBC Canada's Smartest Person webpage.